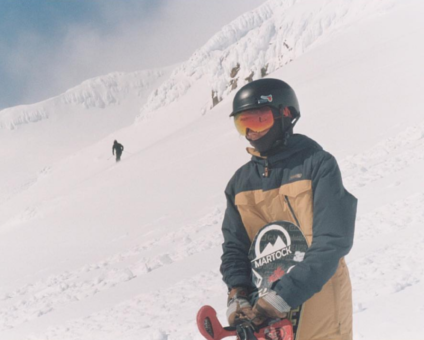 Zach started snowboarding at 10 and was hooked immediately.  He became an instructor at Martock at 15, and quickly developed a passion for passing on his love of snowboarding to others. Zach became a CASI certified park instructor and Level 2 instructor at 17, and then the summer after graduating high school he started doing back to back snow seasons.  He spent the summer of 2018 teaching on Mt Ruapehu (an active volcano) in New Zealand, and the 2018-19 winter teaching and riding pow in Niseko, Japan with GoSnow Gondola Snowsports.  Some highlights of his snowboarding career so far are snowboarding into an active volcano crater in New Zealand, riding pillow lines in Japan, summitting Mt Yotei in Japan, and riding 12 straight months from July 2018 – June 2019.

Zach is a Competition Introduction Advanced Freestyle Trained coach and is trained as an Air 2 trampoline coach.  When he’s not coaching, he works as the Parasport Coordinator for Sport Nova Scotia, as well as volunteers with CADS Nova Scotia and with Nova Scotia Snowboard’s Event Series.