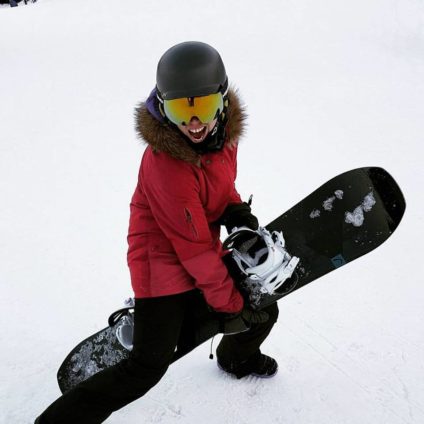 Kimberly was born in Prince George BC and had moved 14 time before settling just a hop skip and jump from Ski Martock at the age of 13. Her first half a season was on skis but she quickly acquired an interest for snowboarding.

Sport has always played a big role in her life where she was able to learn the meaning of sportsmanship, fair play and friendship. When she wasn’t diligently working on school projects, attending  Cadets, or  playing on a school team such as volleyball, track and field, cross country, softball, wrestling, rugby, or hockey, she would spend every bit of spare time at the hill. Kimberly started competing in Slopestyle events and had been a part of the Martock Freestyle team. When she joined the school Boardercross team she really excelled and knew this was her calling. She was determined to go faster than the boys. Hard work lead to a position on the Provincial team competing at NorAms and National events for many years and then onto the Canada Games Core team where she had a respectable 4th place finish.

With years of leadership training through the Canadian Cadet Program and gratitude towards SBNS, she felt the need to give back to the sport and became a certified Snowboard Instructor as well as a Coach. She has a big heart, a passion for the sport and is beyond excited to help her athletes overcome their fears and make their Snowboard goals a reality!